US Potential for Carbon Materials Expands with Development of Domestic Sources

There’s a potential big payoff for using CFRP in vehicles, as light weighting and other property improvement of key vehicle components such as wheels can enable increased payload, performance, protection, reduced fuel consumption, reduced maintenance and sustainment costs, and improved vehicle durability and reliability. Lessons learned from operations in formidable environments indicate that vehicles need to be more heavily armored, yet not at the cost of limiting the functionality or shortening the lifespan of the vehicle system. Up-armored ground vehicles have experienced suspension, powertrain, cooling, and other system issues, due to the extra weight added for protection. This creates maintenance, supply chain, and sustainment challenges, while further burdening the logistics system. 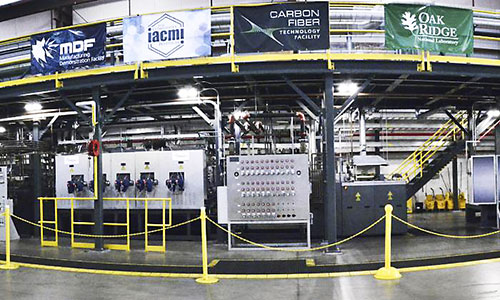 However, the adoption of CFRP in vehicle light-weighting technologies has been hampered by the high cost of carbon fiber, which is produced via a complex manufacturing process and uses relatively expensive precursors. The same is true of the related carbon and graphitic foam materials.

Furthermore, research into lower-cost ways to develop carbon fiber and related carbon materials faces another barrier—a substantial portion are produced outside of the United States, primarily in China. The impact of the sourcing difficulties is even further amplified by the current/ recent supply chain disruption resulting from the coronavirus pandemic.

It is clear that US military and commercial interests have a strong and ongoing need for a reliable source of carbon fiber technology. To help achieve that goal, NCMS has partnered with Advanced Carbon Products Technologies (ACPT) and US Army Ground Vehicle Systems Center (GVSC) in a series of projects, most recently titled Innovative Carbon Fiber and Graphitic Foam Solutions, which began in 2018. In the first phase of the project, NCMS also partnered with Accuride Corporation, a manufacturer of wheels, wheel end, and braking components for commercial and passenger vehicles. In addition to the focus on developing carbon fiber, this initiative has also been investigating new uses for the related carbon materials.

A key objective of this program has been to develop and mature a low-cost domestic source of mesophase pitch, one of the two major precursors of carbon fiber and the precursor for graphitic foam materials. ACPT has patented processes to produce both isotropic and mesophase pitch materials from low-cost petroleum oil. A key feature of ACPT’s technology is that it replaces high-cost batch production with a lower-cost continuous process, thus offering the potential of substantial cost savings over commercially available pitch materials. This pitch development, in progress since the project’s inception, is an ongoing effort being performed at ACPT’s pilot plant located in Hitchens, Kentucky. The pilot plant was formally dedicated in April 2021 in a ceremony attended by Congressman Hal Rogers.

ACPT has developed three grades of pitch in support of this project. Two of these are different grades of isotropic pitch. They are used to make carbon foams that are useful as heat insulators and energy absorbing materials. These isotropic pitches are produced from low-cost by-products of oil refining. The isotropic pitch can also be further processed to produce the third material, called mesophase pitch, which is one of the two main precursors of carbon fiber. It is also used to produce graphitic foam, which, in contrast to the carbon foam, is a very good heat conductor.

ACPT’s continuous mesophase pitch production process is a key reason for the low-cost potential of this technology. But another challenge must be overcome—even the lowest-cost raw materials are of little utility unless they are suitable for producing high-quality end products. In addition to cost optimization, work will continue to further understand processing parameters, efficiency, and impact on downstream material properties (carbon fiber, carbon and graphitic foams, and graphite microbeads) throughout the project.

For example, although mesophase pitch is one of the major precursors for carbon fiber production, the project is working to confirm that ACPT’s technology produces the type of mesophase pitch that can serve as a suitable precursor for carbon fiber. It must also be compatible with existing carbon fiber spinning processes and equipment. To accomplish this, ACPT is currently collaborating with Oak Ridge National Laboratory (ORNL). ORNL has both laboratory and large-scale facilities for fiber spinning process development. Working with ORNL’s test laboratory, ACPT’s mesophase pitch was tested in producing carbon fiber meeting certain key performance criteria. ORNL uses a very systematic process to qualify materials and scale up fiber production. After a process change was successfully implemented, ORNL has cleared the way for scaleup work to proceed.

Scaleup of the carbon fiber is taking place at ORNLʼs Carbon Fiber Technology Facility (CFTF). This facility, with its 390-footlong processing line allows for custom configuration and has a capacity of up to 25 tons per year, enabling industrial partners to validate the conversion of carbon fiber precursors at a semi-production scale. Successful completion of the scale-up process at ORNL will provide vali-dation of the suitability of ACPTʼs mesophase pitch for use in large-scale production from both a cost and material performance standpoint.

The CTMA project partners have also been investigating direct applications of carbon fiber for light weighting. One of the key vehicle components designated under this program has been wheels. Although CFRP wheels are currently available for consumer and racing wheel applications, they have not yet been used in heavy duty wheels required by commercial trucking and military vehicles due to their current high cost and unproven reliability and durability in these demanding applications. Wheels for the M915A3 Line Haul Tractor Truck have been selected for this initiative because the vehicle commonly serves as one of the prime movers for semi-trailers and is also used by the US Army to transport heavy cargo. With the large market segment, design and testing of wheels using CFRP technology would lead to more affordable pricing in the future.

Accuride partnered with ESE Carbon to design a wheel based on a woven long fiber approach, which was selected because it can offer a higher strength-to-weight ratio. The initial wheel prototypes employing this design, produced by ESE, have completed preliminary testing and the product development process continues. While testing has shown some strength criteria have been met, the team is still working to achieve the fatigue life requirements of SAE J267. Evaluation of additional design changes to improve durability is ongoing. Meanwhile, the wheels produced to date have resulted in a weight reduction from 70 pounds (steel wheels) to 27 pounds for the lightest of the CFRP designs.

GVSC is also interested in the potential of carbon fiber for light weighting, given its goal of developing a lighter version of the High Mobility Multipurpose Wheeled Vehicle (HMMWV). The wheel design for the HMMWV is especially challenging, due to its split-rim design. ACPT is working separately with two wheel manufacturers on independent lightweight HMMWV wheel prototype projects.

This initiative, as noted earlier, is also investigating uses for related materials that can be made using the project’s petroleum-based pitch. These include carbon and graphitic foams, graphite, and carbon/carbon materials. Potential applications for these materials include: energy-absorbing vehicle seating systems; electromagnetic interference (EMI) shielding systems; signature reduction; heat rejection systems, such as those used in containment systems for lithium-ion batteries and computer systems; fuel cells; and batteries.

The isotropic pitch developed under this program has been used to produce carbon foams. These foams, formed by being heated under high pressures, can be produced at various densities and are lightweight, thermally insulating, electromagnetically shielding, radar absorbing, and fire resistant. The structure of these foams is isotropic; i.e., uniform in all directions. They are relatively strong and can be easily machined using standard tooling.

In contrast with the isotropic pitch, the mesophase pitch developed under this program has an ordered, liquid crystalline microstructure. The graphitic foams formed from it, which also require heat and high pressure, have substantially different properties than those of the isotropic pitch/carbon foam. These anisotropic, or directional, properties include thermal and electrical conductivity. For example, the thermal conductivity of graphitic foam is up to 4 times that of copper, and the density is only 20% that of aluminum. Graphitic foams of varying densities have been produced under this program, with the high-density materials having the potential for enhanced conductivity properties. Their mechanical strength and machinability is not as great as carbon foams, and their additional processing costs have limited their use to date.

But the complementary properties of these lightweight carbon and graphitic foams give them both the potential to provide a high value to military and commercial applications, and this project is evaluating those end uses while helping to develop a low-cost means of production of the isotropic and mesophase pitch precursor materials.

Graphitic foam panels have been fabricated into three prototype heat sink assemblies. Testing conducted on these prototypes have shown favorable heat conductive (heat removal) properties when compared to aluminum. Fabrication of additional test panels of both graphitic and carbon foams is underway to further test their utility in applications requiring both heat and EMI management.

ACPT has also produced prototype graphite in the form of microbeads, which is a critical material for making batteries and fuel cells. These synthetic graphite microbeads have been compounded and molded into bipolar plates for use in fuel cells. These electrically conducting plates join together the anode of one cell to the cathode of another and need to provide thermal and electrical conductivity, as well as structural support. The plates also account for as much as 80% of the weight of a fuel cell assembly. Replacing half of the graphite with the synthetic graphite beads produced under this program has increased the cell voltage by 6% and shown improvement in key strength characteristics. This could have the practical effect of reducing the weight of each bipolar plate as well as reducing the number of cells needed to achieve a fuel cell assembly’s voltage requirement.

Additional work planned under this program includes the fabrication and testing of nonmagnetic and signature reducing body panels for military vehicles; thermal management and signature reduction for electronic components; performance testing in lithium-ion batteries; targeting avoidance; energy attenuation; use of the mesophase pitch as a precursor for carbon-carbon composites; and use of both isotropic and mesophase pitch in feedstocks for additive manufacturing.

The potential impact of this multi-faceted initiative cannot be overstated. New technology advancements evaluated and prototyped under this CTMA initiative will accelerate the production of lightweight components for heavy-duty vehicles in order to deliver a value-added product to military organizations and the vehicle fleets in an accelerated time frame, and at a reduced cost per unit. Furthermore, it will spur the development of a wide range of goods with performance requirements that can only be delivered through innovative composites.