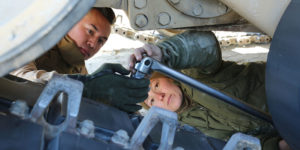 While the term “tracked vehicle” might call to mind battle tanks, tracked vehicles are also used outside the military in many industries. Agriculture requires tractors and harvesters, construction necessitates bulldozers, and winter medical evacuations rely on snowcats—these are just a few of the numerous sectors dependent on vehicles with high-quality tracks for successful performance. A current challenge with tracked vehicles is that the rubber compound used to produce the integral parts on track systems—ground pads, backer pads, and bushings—relies on technology that is over thirty years old.

As time has progressed, energy loads and demands on parts have increased. This causes life limits to be stressed well past initial projections, with current data on the Abrams M1 tank indicating that current pads are experiencing a mean time between failure rate of around 400 hours. As a result, the military and commercial industries that employ tracked equipment have excessive downtime, rising maintenance costs, and lost opportunity costs.

To boost the performance of tracked vehicles, NCMS organized a collaboration, Track Pad Maintenance and Sustainment Improvements. This project is developing and demonstrating a new track pad rubber formulation that has higher load capacity and better durability than what’s currently being used for military tracked vehicles. When successfully utilized by the military, this new rubber compound is expected to benefit many industries including mining, oilfield, truck companies, and tire manufacturers.

“The benefit of the compounds being developed in this project are not exclusive to tracked vehicles,” said Kyle Considine, NCMS Project Manager. “There is significant potential that these rubber compounds could also provide more durable tires for both military and civilian applications on non-tracked vehicles.”

Launched in the summer of 2020 and currently in its second phase, this collaboration brings together the US Army Combat Capabilities Development Command (CCDC) Ground Vehicle Systems Center (GVSC), the US Army Engineer Research and Development Center (ERDC), and industry partner Delta Capital Research. The overall objective is to improve the service life and endurance of track pads to reduce maintenance and sustainment activities. The industry partner is identifying and developing new rubber formulations with higher load capacities and better wear characteristics.

But new formulations—even if they’re designed to be superior—must be put through the current testing regimen for track parts suppliers. The Army has a program to help companies succeed in testing and becoming a qualified provider of parts listed on MIL-SPEC 11891G (tank tracks). To prevent companies from testing prematurely, the Army requires a series of lab testing that is conducted at facilities of the Army Combat Capabilities Development Command (CCDC). This program helps industry providers to improve their formulations through less expensive lab testing to ensure a satisfactory result prior to costlier on-vehicle testing. Once all the laboratory testing is complete, companies can schedule the endurance portion of the certification, which is performance based. If the endurance testing is successful, the industry partner will be listed on the Qualified Parts List (QPL) for MIL-SPEC 11891G.

“The importance of this project is obvious from my personal experience,” said Considine. “Starting in 2003, I served as an infantryman in Iraq, in mechanized infantry. We put our tracked vehicles on heavy equipment trailers and hauled them from Kuwait to Baghdad. Part of that reason was to save the tracks from wear and tear. If we had driven those tracks from Kuwait to Baghdad, it would have taken a significant toll on those tracks. In a war zone, having to worry about the logistical challenges of replacing tracks would be a significant problem. That’s a perfect example of the necessity for a longer life expectancy on these track pads.”

Throughout Phase I, the project team concentrated on creating new rubber compounds for the three T-158LL track shoe assembly components: the ground pad, the backer pad, and the rubberized bushing. The bushing profile was also established for the bushing pin, which is used to connect the track links together. The industry partner’s formulation is proprietary, so they’ve kept their evidence of improved load capacity and wear characteristics close to the vest. But the team also needed to demonstrate that the new rubber compound could achieve QPL status. This certification requires formal approvals from GVSC after two stages of testing. In Stage 1, the testing concentrates on the rubber components and consists of primary and secondary testing of hysteresis, heat build-up, tensile, tear, abrasion, and other factors. Stage 2 focuses on how the rubber reacts after it has been bonded onto metal inserts.

“I recently visited the Keweenaw Research Center at Michigan Tech University,” said Considine. “They were doing testing of the rubber compound and had excellent results.”

Currently, the project is in its second phase, and the project team is continuing to push through the approval process with the focus on achieving Stage 2 approvals from GVSC on all three component parts for the track shoe assembly. GVSC is working with the industry participant to ensure the manufacturing processes are repeatable and quality control measures are in place. Once all of stages of testing have been fully completed and approved by GVSC, the industry participant will be able to show how well their new formulation works in the field.

“The final test in this project will be the actual on-vehicle testing, which we intend to do at the US Army Yuma Proving Ground in Arizona,” said Considine.” A Bradley fighting vehicle will be outfitted with these tracks to see how they perform.”

The project, scheduled to wrap up in June 2024, will yield rubber compounds for track shoe assembly components that are longer lasting and better performing. What’s more, the industry partner’s entry into the QPL means they can transition their new technology to DOD acquisition. Additional benefits of this project for the DOD will include reduced maintenance needs and an increased supplier base, which will mitigate the risk of obsolescence or other supply chain issues. Ultimately, the results of this initiative can also benefit multiple commercial industries that rely on tracked equipment. The project’s improvements in rubber compounds are expected to increase the service life of rubber tracks, yield better traction, increase surface protection, and reduce costs.