The Navy and Marine Corps have found aircraft wiring issues to be among the top contributors of aircraft performance degradation and downtime. There are many false removals of avionic systems due to faulty wires and degraded connectors, up to 80-90% in some cases. Frequent removal and reinstallation of avionics can cause the aircraft connectors to encounter problems with bent pins, pushed pins, or corroded pins. Connectors also can become contaminated with sand, water, or salt. Removal, replacement, and repair of these connectors is a drain on resources, is time-consuming and contributes to lowering aircraft operational availability. Additionally, some cables and connectors are embedded deep in an aircraft and cannot be accessed without major aircraft downtime.

To address the connector issue, the Integrated Diagnostics and Automated Test Systems (IDATS) Team from the Naval Air Systems Command (NAVAIR) at Joint Base McGuire-Dix-Lakehurst, in Lakehurst, NJ, has developed a connector that requires no pins in order to transmit data. The current prototype is estimated to be between Technology Readiness Level (TRL) 3 and TRL 4. 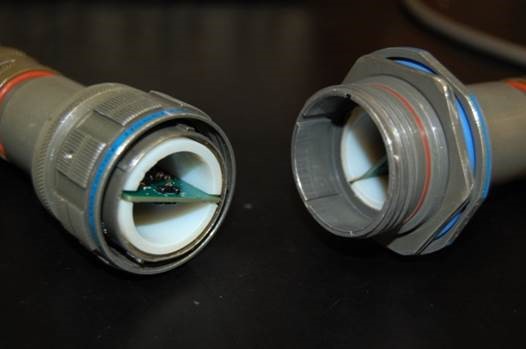 This patent-pending system uses small infrared transceivers to send and receive data. The current prototype, seen in Figure 1, is built to transmit and receive three channels of the ARINC 429 data bus protocol at both 12.5 kilobits-per-second (Kbps) and 100 Kbps. Communication is full duplex and simultaneous across all three channels using an infrared link. The transceivers have been integrated with a microcontroller. All of this has been miniaturized to fit inside a MIL-SPEC connector. Figure 2 is an illustration of the current system. This system replaces 12 connector pins.

The IDATS Team is seeking partners would like to further develop applications for this pinless connector technology. The team believes there are many applications both in the commercial and military world that could benefit from pinless connectors. For example, industries such as automotive, aerospace, heavy construction and military ground vehicles that operate in harsh environments over extended periods requiring frequent component removals and potential damage to connectors would see an immediate improvement in cost and downtime. A variety of licensing or cooperative research opportunities are available to develop this technology for a variety of requirements in several potential industries. Future applications may include extending this technology to higher-speed data buses, such as Ethernet and MIL-STD-1553. A demonstration video of the current prototype is available upon request. Please send all inquiries to the IDATS Lead Systems Engineer, Dr. Russell Shannon at russell.shannon@navy.mil, or 732-323-4538.